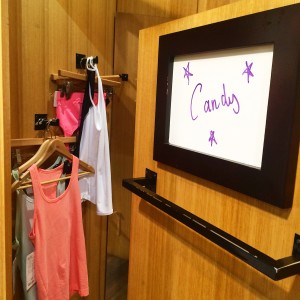 21 Nov I seriously thought this only happened in the movies!

Ok no kidding, I had one of those moments today that you seriously think can only happen in the movies. Thank GOD I had my eyebrows waxed. I’m bursting to tell you what happened but first, let me set the background to the scene…

I’m MCing a Crossfit comp this weekend and wanted to be kitted out by my fav brand lululemon. I contacted my usual store in Brighton who often help me out when I am doing a public event but they had exhausted their marketing budget for this kind of stuff. Bummer. But they offered to hook me up with the store on Chapel Street. Super nice of them. Chapel street were thrilled to help, yay lucky me, so today I went in to choose my items.

I was in the store, the manager Ally had chosen a wicked outfit for me which I had on when I decided I wanted to venture through the store to see what else was on offer. So, no shoes, I wondered to the front and started perusing. At that point a woman walked in and was talking to the assistant right next to me. I was in lala or I should say lulu land and didn’t hear a word until the woman yelled the words “just like her, she’s exactly what we want” I looked around. Who me? Want me for what? What could she want with the girl without shoes? She quickly told me she was a casting agent and they are doing a shoot next week that requires a fit, healthy and happy 30 something girl ‘just like me’. She pulled me straight to the back of the store to do a test shoot on her video camera. It was at this moment when I sighed an audible sigh of relief that I had my eyebrows waxed that morning (it had been a while). I was slightly kicking myself that I wasn’t wearing makeup (#makeupfree #mostdays #notthatglam) but I chucked a lick of lipgloss on, pulled my hair out and did my slap bang casting. It seriously is a role I would absolutely love to do and it’s the type of work I HUNT for every day. Who ever would have thought an opportunity to audition would literally fall into my lap. Wow that’s some powerful manifestation (I’m not even sure I asked for a random girl to cast me in an amazing commercial while I’m not wearing shoes) Impressive.

I get the gig. So please cross your fingers and your toes, especially if you aren’t wearing any shoes.

Diary of a Dream Job – Entry 1
It’s been a bit over a year since I decided to leave my secure, full-time and brilliant job in Radio to take on my ...

Cricket content
#Day30 #44DayWritingChallenge There isn't much more to say today other than I get so excited creating content and even more excited when I get to ...

Diary of a Dream Job – Give yourself a gold star they say…
So…. for the past few month (maybe years whatevs) I’ve been go go go and I never really stop to smell the roses (ps: ...