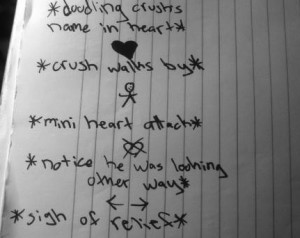 When I was little, I used to do something every time I had a crush on a guy. I’m fairly positive every other girl did it too but whenever we did it, it would leave us in fits of laughter. The minute you admitted or it was discovered that you had a crush on a boy it would be “You and Boy sitting in a Tree K-I-SS-I-N-G” (I’m laughing because I know you just sang that to yourself). Not only would the kiddy rhyme start, but you would doodle their name all over your page with love hearts and the silliest thing of all was testing out how their surname sounded with your name eg: Candy Smith (if I had a crush on a boy called Dan Smith – which FYI I totally didn’t!)

It turns out more than 15 years later, I still do the last one on that list. In fact I did it as recently as last week. I met a guy, thought he was kinda cool, got a bit excited and on the way home started rehearsing my new name. How lame! Really?! Yes really. It makes me laugh so much now because I am obviously at an age where realistically I could marry said guy (although I won’t because I never heard from him again). It also made me laugh because I was saying it out loud while driving. Too funny.

The funny part is that I actually judge the guy based on how the surname sounds with mine. I’m quite fortunate, I love my surname so it has to be a pretty damn good name for me to want to take it.

Having said that, I am 31 and should probably widen my selection criteria from ‘has good surname’ tick! Although I would still be happy sitting in a tree and K-I-SS-I-N-G. Anyone?

Who else wished their name was Lisa, Melissa or Sarah?
Hi, my name’s Cathy, Cassie, Carie, Cannie and sometimes Candy. I have one of those names that isn’t common enough for people to understand ...

Music Review: Heroes (we could be) by Alesso ft. Tove Lo
Day 8 #44DayWritingChallenge   To make up for my lame and slack post yesterday telling you my fav song at the moment, I thought I’d go ...

Are we ever too old to have a crush?
Don’t even try and tell me you don’t love that feeling of having a crush on someone. Getting a little goofy excited whenever you ...

Anyone else keep losing stuff?
#Day31 #44DayWritingChallenge   Why are some of us a little less lucky with our possessions than others? Is it that we don’t care about our belongings ...