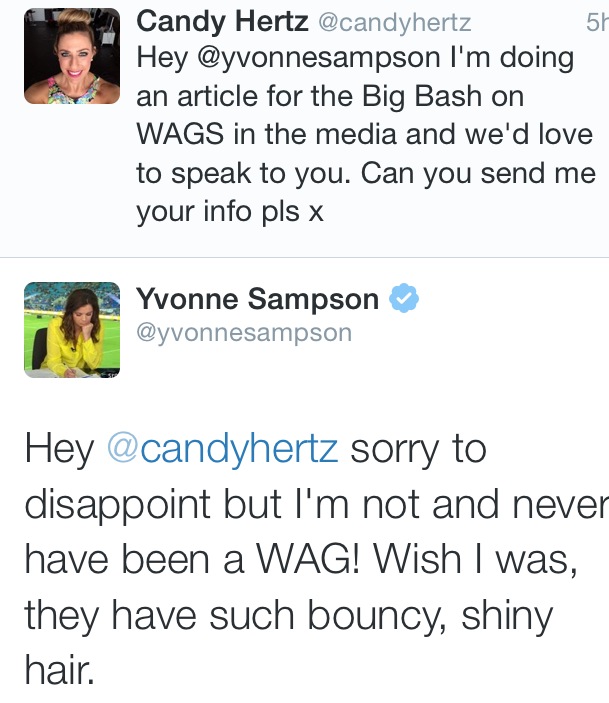 17 Dec Ever sent a message to the wrong person, publicly?

So, you know that feeling when you send a text to your mum that’s a little racier than normal because it was actually meant for the guy you’ve been flirting with? Or if you’ve ever put an xox on an email to your boss? We’ve all done it but luckily it’s usually in the confined of your phone or email account. Well tonight’s incorrect message was blasted on twitter and the aftermath is still going 2 hours later.

I’m doing some incredibly exciting work for Cricket Aus at the moment and loving every minute of it. One of the things I’m working on, is writing an article about Big Bash cricketers who are dating women in the media. Basically media WAGS. They handed me a list and said go nuts. So today I sent all the women on my list a quick tweet to get in touch with them. One of those women was the gorgeous Yvonne Sampson who supposedly is dating Chris Lynn. So I was ever so slightly confused when I got this response:

I happened to be at the QV Night Markets with some journo friends when the tweet came through and I handed it over to them quite confused. They both burst into hysterics, not only did they both personally know Yvonne they also knew her sexual preference that quite clearly explains why she could and would never be a WAG. Oh my. I was mortified. How rude of me and how bad that I didn’t know the facts! In an instant twitter went nuts, ridiculous numbers of people retweeting, liking and commenting to both of us. My twitter has never been so popular. Of course I raced back and replied an apology but it’s still pretty embarrassing.

What a classy woman for replying with such a cheeky and fun tweet. Thanks chick and if the responses are anything to go by apparently you have fabulously bouncy hair! X


This error message is only visible to WordPress admins